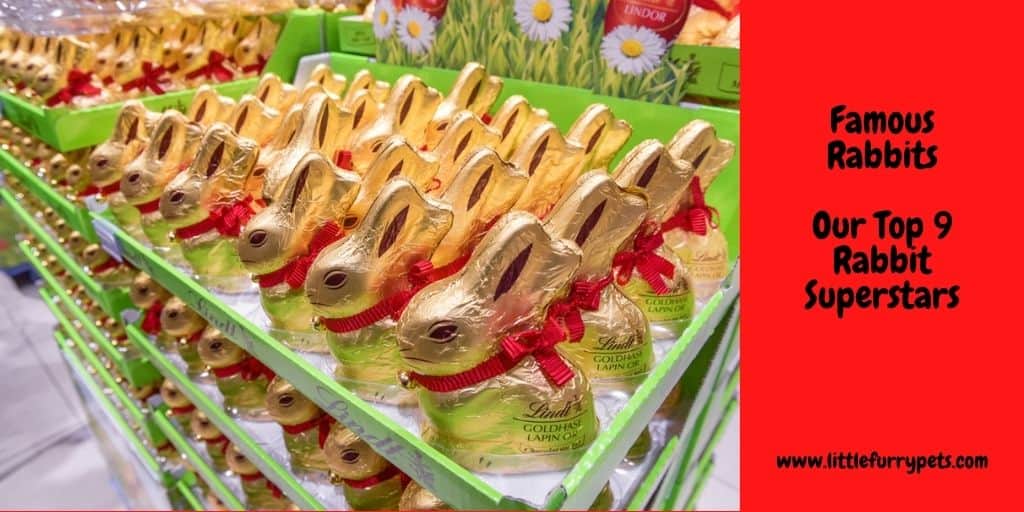 Not all rabbits were created equal. Yes, they’re all obscenely cute, furry and lovable. But some very special famous rabbits have managed to climb out of their rabbit hole and straight into the limelight! As long as we adore bunnies, movies, cartoons and marketing campaigns will always be made starring our furry pals. So, let’s take a look at the most famous rabbits, and explore what they’re famous for.

Quite possibly one of the most famous rabbits out there (at least in the Western world), the Easter Bunny hops into our lives at… You guessed it: Easter! Beloved by children across the world, the Easter Bunny (or your dad dressed as the Easter Bunny!) hides chocolate eggs in the garden, symbolizing new life and the rebirth of Jesus Christ, who is said to have risen from the dead on Easter Sunday.

Although a figment of the vivid imagination of Beatrix Potter, the darling rabbit Peter (or, Peter Rabbit!) hopped into children’s hearts along with his cousins Benjamin Bunny, and his cousins Flopsy, Mopsy, and Cottontail by way of 22 different books written by Potter.

His vegetable-stealing adventures and lucky escapes in the Lake District, England (also the home of Beatrix Potter earned him a place as one of the world’s most famous rabbits. He even stars in his own movie, the synonymous Peter Rabbit, released in 2018. If there was a walk of fame for rabbits, Peter Rabbit would definitely be on it!

While most of us know Roger Rabbit from the beloved Disney movie Who Framed Roger Rabbit? , Roger was actually born from the imagination of Gary K. Wolf. Wolf wrote a book called Who Censored Roger Rabbit? which was quickly picked up by Disney and adapted into the cartoon we all know and love.

In the story (which is also where the world first meets the weirdly sexy Jessica Rabbit), a private eye named Eddie Valliant goes on the search to find the murderer of Roger Rabbit, who is found dead in his home. While we won’t ruin the ending, Who Framed Roger Rabbit is a twisted tale of murder, deceit, and doppelgangers! Yep, this bunnies movie is totally worth a watch.

In Lewis Carroll’s famous book, Alice in Wonderland, the White Rabbit is the very reason Alice goes ‘down the rabbit hole’ and finds Wonderland! Well, it wouldn’t have been much of a story if that hadn’t have happened now, would it?

The White Rabbit, who is suspiciously extremely late for a very important date (despite carrying a pocket watch in his tiny waistcoat) is a key character in the motley crew of Wonderland’s inhabitants. Thanks to the White Rabbit, Alice is awoken from her boredom and introduced to the curiousness of the world of Wonderland.

Rabbit from Winnie the Pooh

In the Winnie the Pooh cartoons, bunny rabbit, known only as Rabbit, is fairly bourgeois as rabbits go. Definitely one of the more sophisticated cartoon bunnies, Rabbit likes to pass the time by reading, making tea and tending to his garden, as well as maintaining a beekeeping side-hustle.

Aside from being super-productive, this famous rabbit is loved by Winnie the Pooh and his friends as well as being of of the smarter and more sensible of the happy Hundred Acre Forest crew. This complex bunnies cartoon persona makes him stand out from the crowd, with some fans speculating that he is an OCD sufferer!

‘Eh… What’s up Doc?’ could be the most famous catchphrase of any bunny rabbit, famous or otherwise! Of course, these are the words of Bugs Bunny. Instantly recognizable for his Brooklyn twang, Bugs Bunny stormed onto our screens as the starring character of Warner Brothers Looney Tunes animation.

The grey and white bunny, who’s usually referred to as simply ‘Bugs’, has appeared in over 150 cartoons, typically getting into mischief and (lovable) trickery. Bugs Bunny is often found in the form of a stuffed rabbit and is a total favorite of kids (and adults!) around the world. He’s a film star, a cultural icon, and a lovable rogue, so we think Bugs Bunny is going to stay on the scene for a while yet!

The Energizer Bunny is the mascot of Energizer Batteries in both the US and the UK. With bombastic energy levels, this uber-cool bunny is usually found bounding around, sporting black sunglasses and blue and black stripy flipflops.

The Energizer Bunny is the result of a hugely successful advertising campaign and was first seen on a TV advert back in 1989. The American icon is arguably one of the most recognizable bunnies in the world but is often confused with the Duracell Bunny (who are categorically different bunnies, with Duracell being found in Europe).

If you’re not a hardcore literature fan, you might have first heard of the Velveteen Rabbit in that Friend’s episode, where Chandler buys it for Cathy’s birthday, but Joey takes the credit. In fact, the Velveteen Rabbit is a very famous book written by Margery Williams and published in 1922. The Velveteen Rabbit begins life as merely a stuffed rabbit, but becomes ‘real’ because of the intensity of love bestowed on him by his owner.

The story is actually quite sad, as the Velveteen Rabbit (who was the favorite toy of the main character, a little boy) gets replaced by a real bunny rabbit and subsequently cast aside. The tale takes a sinister turn and is known for being a bit of a tear-jerker. So, if you plan on reading it, make sure you’ve got some tissues ready!

What’s the best way to get kids to fall in love with your cereal brand? Create a super cute bunny rabbit and plaster it all over the boxes, of course! In this case, that bunny rabbit is Trix Rabbit, who shares the name of the delicious breakfast cereal.

Trix’s modus operandi is to trick children into giving him a bowl of cereal, however, he’s duped every time with the kids exclaiming “Silly rabbit, Trix are for kids!”. Well, for a presumably rather hungry bunny, Trix sure has a lot of energy!

So, there you have it, the world’s most famous rabbits and their fascinating backstories. After reading this list, you’d better hope the subject of rabbits comes up in your next trivia quiz so you can show off your newfound bunny knowledge!