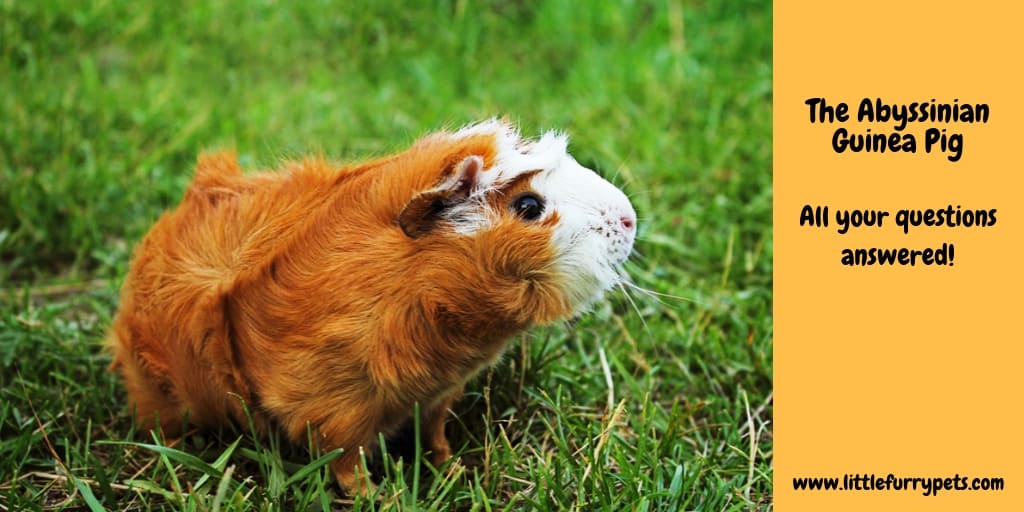 If you’re considering keeping a pet guinea pig, then welcome to the world of cavies. Guinea pigs do make excellent pets and they’re relatively easy to care for. As you’re about to learn, keeping these little critters can be a rewarding experience. Their engaging character and quirky appearance will soon have you hooked.

Check out this article to learn everything you need to know about this most delightful guinea pig.

The term ‘‘ for a guinea pig is often used by professional breeders and showers. It derives from the rodent genus ‘Cavia‘ and includes, among other animals, the familiar guinea pig. The domestic ‘cavy’ is the term you’ll likely encounter when researching guinea pigs.

There are several explanations for the ‘guinea pig’ name, none of them definitive – the Guinea origin could be due to the first arriving in European ports via Africa. Why pigs? Again, the origins are speculative, but it’s reasonable to suggest their physical structure lends a certain porcine cuteness to them!

Where do Abyssinian Guinea Pigs come from?

Like its cousin the Peruvian Guinea Pig, The Abyssinian Guinea Pig originates from South America rather than Guinea in West Africa – their range spans the entire Andean mountainous region, including grasslands, rocky uplands and forest borders. Farmers in the region still rear guinea pigs as a food source, while art, sculpture and myth attest to the important role these little beasties play in Andean culture.

The Abyssinian Guinea Pig is one of the oldest known breeds, but the former name of modern-day Ethiopia has no connection to this guinea pig breed. One theory is it was created to add a degree of exoticism. The breed, otherwise known as a rough-haired guinea pig, sounds so much more alluring when termed an Abyssinian guinea pig!

The Victorians particularly loved them for cavy exhibitions because of their interesting coats – the exotic sounding name, therefore, would be an added attraction. Indeed, this guinea pig breed was and remains one of the most popular to keep as a pet, exotic name or not.

The Abyssinian guinea pig’s coat is famed for its beautiful ‘rosette’ formations – unique among guinea pig breeds. Hair length usually averages just over 3 cm [1.5 inches] and grows in a ‘swirl’ pattern, the famous rosettes. The hair forms ridges which converge across the spine to create the beautiful effect of swirling rosettes over the body.

A good show Abyssinian guinea pig will have an even number of swirls and be symectrical in placement.

A coat of many Colors

The Abyssinian guinea pig comes in a range of color variants, as well as quirky little features such as mustache-like facial markings! It’s the combination of rosettes and colors that make these guinea pigs so attractive to professional breeders and the general enthusiast. Here are a few examples of the color combos you can expect with the Abyssinian.

Roan – A blend of dark and light hair.

How big does an Abyssinian guinea pig get?

The Abyssinian Guinea Pig is one of the larger Guinea pig breeds. Their average length ranges between 8 and 12 inches, which like most living creatures, will depend on genetics and general health and care. The male is typically longer and heavier than the female.

If you are considering breeding your Abyssinian guinea pig, they generally breed well with few health problems. However, the exception that’s really important to note is the Roan – breeding Roans together recommended. This is due to a potentially lethal genetic defect wherein young can be born without eyes. To avoid this , Roans should only be mated with non-Roan variants.

The Abyssinian guinea pig is a robust and confident little pet, and they simply love contact and play, whether with other Guinea pigs or their human families.

This is why they make such good pets for children, too.

Their gregarious personalities can mean they dominate other breeds, and are relatively easy to train. Abyssinian Guinea Pigs really enjoy the interaction with their humans – so whether handling, grooming or playing, you’ll gain rich rewards with these guinea pigs.

This breed is sometimes considered ‘naughty’ in terms of the mischief they can get up to – in other words, they’re a fun pet who will engage you in much guinea pig style entertainment!

Being the extroverts they are, the Abyssinian guinea pig needs lots of contact and stimulus. Therefore, if you have just the one guinea pig, you’ll need to ensure it has plenty of opportunity for mental and physical enrichment. Lots of guinea pig friendly toys combined with access to their human friends/family for playtime is an important aspect of owning an Abyssinian guinea pig.

How long do Abyssinian guinea pigs live for?

Like the majority of guinea pigs, the Abyssinian’s average life span is between 5-7 years. Of course, the correct care, good food and plenty of cuddles will give your pet the best chance of a long and happy life.

With that striking ‘cowlick’ style coat, the Abyssinian guinea pig requires regular grooming, preferably with a nice, soft brush – a toothbrush is perfectly acceptable. Grooming, of course, is another way to bond with your little buddy and enjoy lots of interaction.

However, given their fur is short and coarse, they do not need the same level of grooming as their long hairs cousins.

Its recommended that you brush your pet Abyssinian every couple of days. In general, Abyssinian Guinea Pigs really love to be brushed, so it could be you who gets bored first!

Offer a varied, guinea pig friendly diet – variety is the spice of an Abyssinian guinea pig’s life, so giving your pet interesting foodstuffs to try out is part of the enrichment process.

Remember that guinea pigs are grazers, so you need to provide them with quality grass/hay for essential digestive health. You can give them grass-based pellets as part of their important Vitamin C intake.

As their teeth continuously grow, guinea pigs need to graze on these foodstuffs daily, as well as leafy greens.

What vegetables can a Abyssinian guinea pig eat?

The following foodstuffs are all packed with goodness for you pet, high in vitamin c, and can be fed daily. NB. Any changes to diet should be gradual to avoid upset tummys

Fruits are also packed full of vitamins, but should be fed less often due to the sugar content. The following are examples of fruits guinea pigs can eat.

As with all animals, weight can be a good indicator of overall health, and help detect underlying health issues.

We have covered this topic in our Guide to Guinea pig weight to help you identify if your Abyssinian Guinea Pig is over or underweight, and what to do if you notice changes in your buddies BMI!

You’ll have a happy Abyssinian guinea pig as long as you provide a safe, warm environment whether indoor or outdoor. If outdoor, the enclosure must be predator-proof and offer adequate shelter from the elements.

Ensure there is plenty of scope for exercise, with space to explore and move around, plus safe toys that can’t be swallowed/ingested. Give your pet plenty of bedding for burrowing and cover, such as dust-free hay but not cedar/pine type bedding – this can be toxic.

To keep your Abyssinian guinea pig in optimum condition, observe daily for any issues/changes in behavior. It’s a good idea to give your pet a yearly health MOT, so the vet can check general health as well as the condition of teeth and nails. The vet can also advise on diet and healthy vitamin/mineral intake, and if you have any questions along those lines then the LFP team ALWAYS recommend you consult a veterinary professional.

Vitamin or ascorbic acid is an essential nutrient which is used in the repair of tissue, prevention of scurvy and helps boost the immune system.

Like people, guinea pigs lack the physical ability to produce vitamin C so it must be sourced via their diet. Unfortunately Vitamin C deficiency is still common in captive guinea pigs.

The bulk of your pets diets will be made up of pellet feed, and most good brands on the market contain added vitamin c.

But in addition to these, fruit and vegetables high in vitamin C are to keep your pet healthy and these can be used to supplement their daily meals

Bad hygiene and poor living conditions can result in skin problems for your pet. Whilst these are all treatable, the most important point we can make is that they are AVOIDABLE if you care for your guinea pig in the correct way.

accompanied Being foragers by nature, it’s possible for your pet guinea pig to pick up parasites from their bedding, so its important to keep a regular cleaning regime.

Mites, fleas, and lice all cause itching, so if you notice your pet is scratching more often than normal, especially if accompanied with dry skin or hair loss, then a trip to the vet is in order.

Bumble Foot is another skin problem, and Abyssinian Guinea Pigs are not immune to this. Bumblefoot, or Pododermatitis as its also known, are sores on the bottom or horrible outcome.

This is usually caused by inappropriate cages with dirty or rough surfaces. Again, this is treatable, but if left the infection can spread to the tissue and bone in the foot.

Obesity is another cause of bumblefoot, as the extra weight causes pressure on their tiny feet.

Conclusion – Are Abyssinian guinea pigs the right choice for you?

You’re now ready to enter the magical world of the Abyssinian guinea pig, but apply caution – you and your family might lose your hearts to this charismatic little pet. Enjoy every moment!