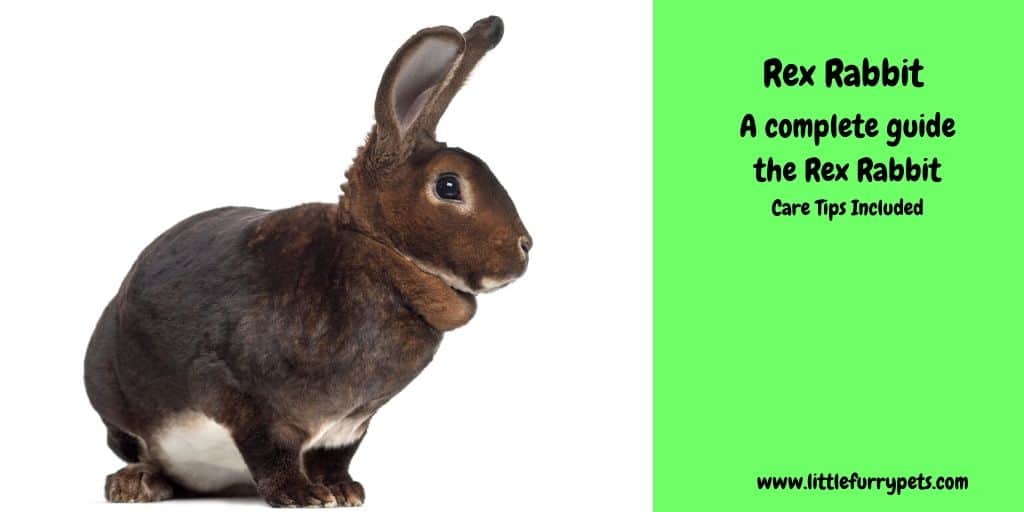 Rex is a medium-sized rabbit that is suited to all types of pet owners because of its calm and playful demeanor. It is also very intelligent and docile. But, what makes it stand out from the rest is it velvet like fur.

Its fur is short and soft that points outwards, making for a lush touch. It is very friendly to handlers and pet owners. Rex falls under the commercial category due to its large size. It is a common breed available at most commercial breeders.

The British Rabbit Council (BRC) classifies rex as a proportional animal with well rounded and complementary hips, ribs, and shoulders. It has a broad head, erect ears, and short, straight legs.

The BRC recognizes 16 coat variations for the rex breed that include seal, chinchilla, castor, black, opal, amber, broken, Californian, and white. Mature rabbits weigh between 7.5 and 10.5lb. It has robust hind limbs and curly whiskers

Rex is native to France, where it was developed in the early 20th century by crossbreeding wild rabbits. Using wild rabbits that are renowned for their luscious fur, the breeders created a nubile domestic breed that appealed to bunny lovers worldwide.

Rex featured on the Paris international rabbit exhibition of 1924 and attracted huge interest from other breeders. It soon found its way to the U.S., where the American Rabbit Breeders Association (ARBA) endorsed it.

Breeders derived Rex from a mutant of the wild rabbit that had short velvet fur. The mutation manifests in two distinctive features. First, its hair projects outwards instead of rolling over like in other breeds. Second, its guard hairs are the same size as the undercoat, unlike in other breeds where they are longer and thicker than the other fur.

The rex gene is recessive, meaning that if it mates with other varieties, the offspring will not have distinctive hair. You can only produce Rex Litter by mating two Rex Rabbits.

Rex Rabbit has coat that is very dense with uniform hair size and quality all over the body.

The fur is short ranging from half an inch to a full inch. Its thick fur is popular with commercial breeders who harvest the fur for textile production. However, the unique coat has made it very popular with pet owners who also love its charm. Pet owners should exercise minimal grooming because excessive petting can damage the skin. If it is dirty or in need of grooming, owners should use a damp clothing to wipe the coat. Pet keepers should avoid bathing the rabbit because it causes distress or even cardiac arrest in extreme cases.

Availability – How popular are Rex Rabbits as Pets

Most of the rex rabbit pets available on the market are naturally bred, implying that they are unlikely to have birth defects. They are great pets because they are docile, attractive, and very photogenic due to their smooth velvet fur. They are quick to adjust to a new environment and are friendly to new owners.

Even though they come in a variety of , most Rex Pets have a dark blue shade with patches of black and white on the chin and belly. Despite its deceptively delicate look, it not a high maintenance breed and requires lesser care than most other hybrids.

A healthy rabbit can live for 5 to 6 years.

Standard Rex bunnies weigh between 6 -12 pounds while the mini rex rabbit weighs 3-5 pounds. Chinchilla rex is one of the varieties of this breed on the market. It has a dark blue coat with patches of white and black on the front. It weighs around 6-8 lbs and has a proportional body with a big head, erect ears, and firm hind legs.

However, it is not suitable for inexperienced breeders because it is hard for amateurs to produce that is acceptable on the market.

Provide rex with proper accommodation of the right size and materials. You should construct an enclosure that allows it to stretch out, play, run, eat, and defecate.

The ideal rabbit cage is 6×12 feet providing around 32 square feet of play and movement area. Typical enclosures are either pens or playpen gates.

The materials for should be stiff wire on the sides with a solid bottom. Avoid wired floors as they can injure and cause discomfort. The pen should have bed linings that are cleaned daily and replaced every week.

It is important to socialize the rabbit by taking it out of the open so that it can roam the compound or in a bunny-safe room.

Allow it to interact with the family because such encounters make it friendly and playful. Cover up wooden furniture and power cables because bunnies have very sharp teeth that they use to nibble at wooden and plastic objects. If you own a backyard garden, allow it to play there in a secured pen or under close supervision.

Pet owners can also rabbit-proof the whole compound to allow the bunny to roam the entire home area.

Rex has no special dietary requirements and can eat all the foods that are edible to most bunny breeds. The diet should be 70% hay, 25% fruits and vegetables, and 5% pellets.

Consult your vet or reputable pet store on the best and safest food for your bunny. If you make DIY feed, ensure that it is 70% hay mixed with fruits, pellets, vegetables, and green leaves. Ideally, you should use orchard hay and moderate leguminous , such as alfalfa. Only feed it fruits and vegetables with high sugar content sparingly because they can cause .

Remove seeds from fruits because some of them are toxic to bunnies. When introducing a new food, first research on its suitability and risk of toxicity before feeding it to the rabbit.

Finally, always provide the rabbit with clean water to drink.

Rabbit teeth continue growing throughout their life and need to be worn out by dry to keep them in check. That is why it is essential to provide hay and other types of fibrous plants for it to chew. However, if the feed does not wear down the teeth, they may overgrow protruding into the jaws and causing unbearable pain. The overgrown teeth may also cause infection. Signs of overgrown teeth include drooling, sluggishness, and loss of appetite.

You should conduct routine checks on the rabbit’s mouth for overgrown teeth. If they are overgrown on infected, take it to the vet for trimming and treatment with antibiotics.

Rabbits inevitably ingest hair while grooming, and it is important that you provide it with high-quality to help clear hair clumps that accumulate in the intestines. If it is unable to clear out the hairballs, it can develop GI , which can be fatal.

Check of signs of excessive hair ingestion, especially during the shedding season, by inspecting the for droppings that look like strings of beads.

All rabbits are prone to developing this infection that affects the toe pads. It is a bacterial disease that results from living in damp conditions. The exposure to dampness causes hair on the toe pad to thin out, exposing the skin to infection. If not attended to, the illness can deteriorate to debilitating pain and joint inflammation.

You should take your bunny to a vet if it develops this infection to ensure that it gets proper treatment.

You should take your bunny to an annual checkup at a reputable vet facility. You should also monitor its health and watch out for symptoms of illness that include:
• Significant hair loss
• Disabled back legs or inability to hop
• Red urine
• Gloomy or unresponsive behavior
• Diarrhea or loose droppings
• Fever at high temperatures
• Drooling

Unneutered bunnies also engage in mischievous behavior such as urine spraying and fighting. Neuter does at the ages of 4-6 months and bucks at 3-4 months. Neutering prolongs the rabbit’s life and reduces the risk of uterine cancer for does.

Rex is a friendly breed that does not mind petting and grooming, especially if it is familiar with the person handling it. Endear yourself to the rabbit by providing it feed and opening its cage to let it explore the compound. In most cases, a bunny gets attached to the person who feeds and pets it most often. However, it will also be calm with strangers who handle it gently and keep grooming it.

Rex is a low maintenance rabbit that is suitable for first-time pet owners and seniors. It is also ideal for singles and couples with children. It will get along with children as long as you teach them how to handle and care for it. Let kids know that it is fragile and requires more delicate handling than dogs. Rex can be breed for meat and fur because they have a commercially viable mature weight. The chinchilla is popular with fur producers due to its uniform and exotic hair. You can also use them for modeling and entertainment because they behave naturally on set.

Rabbits have different personalities, so it is hard to nail down on the most suitable toy for your pet. You can try different items from your pet store to see which one it likes most.

Rex rabbits do not bite or scratch but might do it when seeking attention. They will usually come close to you when hungry or needing petting and only nip if you don’t pay attention. Further, avoid putting them in uncomfortable positions because they might scratch or bite when they are scared or agitated. You can tell when a rabbit is scared or offended by your actions through behaviors such as stomping, hissing, growling, and whimpering. Finally, young bunnies are very nervous and will scream if you mishandle or introduce them to strangers.

You can keep several Rex Bunnies in your home because they are very social and love the company of other rabbits. The companionship also keeps them happy and prevents depression that may manifest through irritability. Some pet owners buy rex does to mother their younger rabbit pets due to their excellent nurturing skills.

However, it is important that you go through the process of bonding properly because rabbits introduced to each other as adults are prone to fighting. Ideally, you should neuter the bunnies before introducing them because fertile rabbits are territorial and will fight to the death over their tuff. It is also preferable to introduce opposite sexes because they have a much easier time bonding than bunnies of the same sex. Bring the male first and introduce the female later because does are hostile to new males. Expose them to each other on a neutral ground such as the garden rather than the cages to facilitate bonding. You should also monitor the interaction by intervening to stop fights until they get accustomed to each other. Alternatively, buy young rabbits of the same age because they tend to bond more quickly than adults.

Rex Bunnies are very intelligent and easy to train for different purposes. Play with it at least 2 hours a day to help it relax and facilitate bonding. Train it to urinate and defecate in the litter because their urine has a very strong odor that can stink your house or compound very quickly. Coach it with verbal commands and reward it with praise and petting when it does it right. If possible, teach your bunny to sip water from a dripper because it will save you the trouble of cleaning the watering bowl frequently.