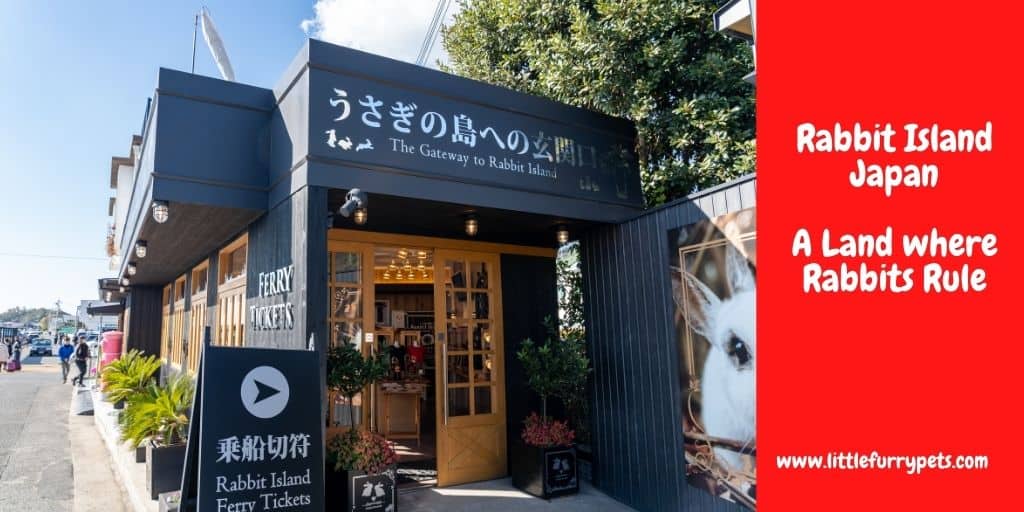 In a land far, far away (or just around the corner, if you happen to live in Japan) lies an island steeped in mystery, controversy, and, well, hundreds of rabbits. That place is Okunoshima, or “Rabbit Island”— a small island found in the Seto Inland Sea of Japan, which just so happens to be populated by 700 to 1000 cute, fluffy bunny rabbits.

As idyllic as it sounds, the rabbits are not there because nature intended them to be. In fact, nobody really knows how they got there in the first place, although there is no shortage of rumours! So, read on to discover more about the mysterious island of rabbits… Who knows, you might be so intrigued, you might even plan a visit!

Is there an island in Japan full of rabbits?

The short answer, is yes. The island is called Okunoshima, and it lies off the coast of the Japanese city of Takehara, in the Hiroshima Prefecture. Now, as history students will know, Hiroshima is a city with a dark and tragic past, known for being the target of the the world’s first nuclear bomb in World War II.

The island of Okunoshima (known locally as Usagi Jima, which translates to… You guessed it: Rabbit Island), was used by the Japanese during World War II to house a poison gas factory, manufacturing thousands of tons of poison during the war. Historically, the island was nicknamed “Poison Gas Island”. So “Rabbit Island” makes a nice, friendly change, for sure!

The dangerous gas was predominantly used on the neighbouring China, in a time where chemical weapons were, unfortunately, the weapon of choice. So, where now lies something of a bizarre haven for bunny rabbits, formerly held a much more morbid purpose.

The secrecy of Japan’s poison gas operation resulted in the island being removed from national maps. Of course, this further adds to the intrigue of this mysterious island. Nowadays, if you decide to visit the island, instead of dark remnants of a bloody war, you’ll find the island awash with hundreds upon hundreds of bunnies.

With an area of roughly two and a half miles around, filled with beauty spots, piers, and Instagrammable nature lookouts, the island is, at first glance, like any other. Of course, it won’t be long until you witness the hundreds of rabbits hopping around!

How do you get to Rabbit Island?

To do this, you’ll need to acquire a Japan Rail Pass before entering the country. You can choose from a seven, fourteen, or twenty-one day pass, depending on the duration of your stay and travel needs.

Make your way from Hiroshima Station (Shinkenson) to Mihara Station using your pass. Then, take a train to Tadanoumi Station. At this point, you’re very close to the Rabbit Island! From Tadanoumi, follow signage (on foot) to Okunashima Port. Ferries from here leave regularly, take around ten minutes, and will take you straight to Rabbit Island. The trip is a brilliant day out, and you can be there and back in a day, easily.

Remember to bring rabbit food with you, if you intend on feeding the rabbits you’re certain to encounter upon arrival! A little word of warning: although it’s not strictly prohibited to bring rabbit food for the rabbits, it is frowned upon by the authorities. However, as there is no natural food source on the island for the bunnies, there can be no concrete ban, as the poor rabbits would eventually starve. The rabbits are not native to the island, and therefore do not naturally fit into the existing eco-system. Read on to find out why:

So, why are there rabbits on Rabbit Island?

Okay, nobody truly knows. But what we do know is that a few rabbits were placed there around 1929, in order to test the efficiency of the chemical weapons created in the Japanese poison gas factory. While experts claim the rabbits were euthanized after the gruesome testing, some people speculate that the current population are descendants of these unfortunate test rabbits! But hey, the official statement is that this is not the case. Curiouser, and curiouser.

Other rumours suggest that a British couple brought the rabbits to island back in the 1970s, and their numbers escalated from there. Some say a local school released them. Well, it truly is a mystery. But what’s for certain, is that at the time of writing, there are an estimated 700 to 1000 cute, fluffy European bunnies bounding around the island!

Not just home to cute bunnies…

However, the influx of rabbits is not the only reason tourists flock to island en masse. Like many places in Japan, the Seto Inland Sea island is home to some beautiful hot springs, often frequented by elderly tourists. Additionally, local schools will often go on field trips, not only to see the Rabbit Island’s fluffy residents, but primarily to visit the visitor center, and poison gas museum for educational purposes.

Can you take rabbits from Rabbit Island?

According to the official Rabbit Island website, a visit to the island is thought to be “a place to seek good fortune for your own family’s fertility”. This is because rabbits are known for their impressive fertility rate, and their penchant for hanging out with their large (sometimes, gargantuan) families. Well, the term “breed like rabbits” exists for a reason, doesn’t it!

Unfortunately for rabbit enthusiasts across the world, who maybe travel to the island in hope of stashing one of the fluffy natives (so to speak) in their bag, you’re explicitly forbidden from removing any of the rabbits from the island. Yep, sorry guys. As per the Wildlife Protection and Hunting Law, you need to gain prior permission from the Ministry of Environment, before you go capturing the wild bunnies. Sorry.

If you’d like to take a memoir from your experience of the island, opt for a souvenir from the island’s gift shop, instead! The cute gift shop sells totally awesome wares, such as rabbit tote bags, rabbit mugs, rabbit key chains, and, um, octopus kelp rolls. Although it seems a little random, in actuality, the area surrounding the island is known for producing delicious octopus delicacies. For the ultimate Japanese experience, make sure you sample one of these fishy snacks. Well, when in Rome, as they say!

In fact, speaking of rules and regulations, there are quite a few things you need to be aware of before you head to the rabbits island of Okunoshima:

So, you’ve made it. You’ve traversed the Hiroshima Prefecture of Japan, and you’ve stepped off the ferry and on to the famous (or infamous?) land of rabbits. Now, there are a few rules you’ll need to abide by if you’re going to stay on the right side of the locals. Here’s a few tips for visitors:

Of course, the number one rule is do not take rabbits from the island. At the same time, observe these rules to gain the maximum enjoyment from your visit. It’s certainly a great day out, and a superb way to spend one of your days while travelling or visiting the island nation of Japan.

As rabbit islands go, Okunoshima is the only one in the whole world. And, we don’t know how long it’ll stay the way it is, seeing as the rabbits aren’t really supposed to be there… So, make the most of your trip, and be nice, kind, and respectful!