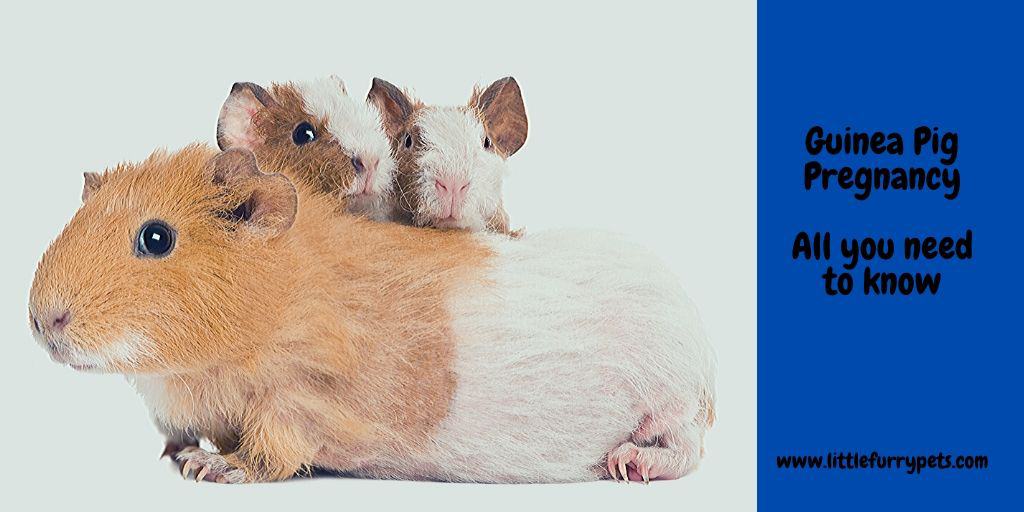 Pregnancy is a fact of life, and if you own a female guinea pig, it is something you may have to deal with. Even if you have no plans to breed them. However, it is important to know that pregnancy in a guinea pig is significantly different from human pregnancy. Not least because guinea pig pregnancies tend to end in multiple births.

The main ways to prevent pregnancy include guinea pig neutering and separation of male and female guinea pigs. Yet, neutering cannot be done too early and guinea pigs reach sexual maturity at a young age. It is not uncommon for owners to adopt guinea pigs who are already in the early stages of a pregnancy, without realising.

Regardless of how pregnancy occurs, the average guinea pig gestation period is 65 days. But anywhere in the range of 59 days to 72 days is regarded as normal. This refers to the time between your guinea pig becoming pregnant and its offspring being born. As a general rule, the larger the litter, the shorter guinea pig gestation tends to be.

How to Tell If a Guinea Pig is Pregnant

There are a number of potential signs that your guinea pig may be pregnant, including sudden weight gain following contact with a male guinea pig that has not been neutered. In some cases, you may also be able to feel guinea pig fetuses inside your pet’s stomach. Although you need to be careful not to apply any pressure to the region.

A sudden increase in appetite is another potential indicator. But it is worth stressing that changes in appetite can occur for a wide variety of reasons. Ultimately, if you are wondering how to tell if a guinea pig is pregnant with complete certainty, the only answer is to take your guinea pig to a veterinarian for a pregnancy test.

Feeding a Guinea Pig During Pregnancy

Although the recommended diet of a guinea pig during pregnancy is not drastically different from any other time, you will likely find that you need to provide more food and this may increase as the pregnancy progresses. Moreover, it is important that your guinea pig has a varied diet, which should consist of:

It is generally accepted that pregnancy should result in a tripling of daily vitamin C intake. Which is why citrus and kiwi fruit can have a role to play. Some vets may even recommend vitamin C supplements. Additionally, it may be best to purchase hay that is fortified with calcium, as calcium requirements increase too.

Finally, it is important to try to keep the diet as consistent as possible for the duration of the pregnancy. Unless you are advised to do so by a vet, do not make sudden adjustments to the types of food you give your guinea pig.

Providing the Right Environment During Pregnancy

During pregnancy, you will need to provide your guinea pig with a clean cage or hutch. it may also be necessary to separate your pregnant guinea pig from any other guinea pigs you have. Especially if any of them display aggressive tendencies. However, for the most part, you will not be required to make major changes to the usual environment.

As the pregnancy progresses, you may find that your guinea pig becomes less mobile. This could limit the parts of the cage or hutch which are accessible. Especially if there are any narrow passages to navigate. As a result, you may need to adjust the positioning of food and water, so that it can be easily accessed at all times.

Risks for Guinea Pigs During Pregnancy

One of the biggest risks in Guinea Pig pregnancy is age. Older Guinea pigs are susceptable to hip issues when pregnant, as a consequence, pregnancies in older guinea pigs may need to conclude with a cesarean section.

Stress is also a risk in a pregnant Guinea Pig. It is impotant to reduce any stress factors including:

Tips for Caring for a Pregnant Guinea Pig

Guinea Pigs will be less keen on physical contact when pregnant. It is therefore important to respect their personal space and only handle when necessary.

Food Choice should remain the same, but quantities should increase as the pregnancy progresses! Vitamin C, as mentioned above should be in plentiful supply.

It is imperative that your care focuses on minimising stress. Keep things consistant, reduce any noise and activity around the Cavy’s living quaters. Seperate any Guinea pigs that show aggression. Dont let the family cat or dog (or any small children!) aggrevate your pet.

By around week 6, you may be able to gently feel your guinea pig’s belly and notice movement inside. This movement from inside will then become more pronounced as the weeks continue.

During the last few weeks of the pregnancy, things become more unpredictable and for inexperienced pet owners, it may be best to seek the advice of a veterinary professional. You will need to stay alert to the fact that your guinea pig could go into labour at any point, so try to be extra vigilant.

By this point, your guinea pig will be noticeably larger and may even have some difficulties with mobility, so you need to be extra careful to ensure that access to food and water has not been accidentally cut off by the layout of the cage or hutch. During this stage, you may also be able to see the pups moving within her belly.

You should note that the late stages of pregnancy are also the period where your guinea pig is most likely to develop certain health problems, including pregnancy ketosis, which is covered in more detail below.

Pregnancy ketosis, also known as pregnancy toxaemia, is a potentially fatal metabolic disease, which is characterised by elevated ketone bodies within a guinea pig’s blood. Ketosis also affects other animal species, including humans, and risk factors include obesity, stress and lack of exercise, which is why it can occur during pregnancy.

Some of the most common symptoms of pregnancy toxaemia include a loss of appetite, lethargy and muscle spasms. You may also notice that your guinea pig becomes clumsy in its movement. In the most serious cases, the condition can result in prolonged unconsciousness (coma) and can ultimately lead to death.

If you suspect that your guinea pig is experiencing ketosis, it is important to seek treatment from a professional veterinarian as soon as possible. Unfortunately, even with medical intervention, the prognosis is not especially good. However, it is possible for guinea pigs to survive, in which case, treatment may include a specialist diet.

Regardless of the size of the litter, labour tends to be a relatively short process for guinea pigs, with delivery rarely taking longer than half an hour in total. Moreover, the need for human assistance is usually minimal.

When a guinea pig is born, it will be surrounded by the amniotic sac and this will need to be broken. In the vast majority of cases, the mother will break the sacs herself, using her teeth, but there are instances where this does not occur. If this happens during your guinea pig’s pregnancy, you should ideally seek the help of a vet. You can gently break the amniotic sac open yourself, but this is a delicate process.

Signs That a Guinea Pig is About to Give Birth

There are relatively few obvious indications that a guinea pig is about to deliver its pups and so it can be difficult to pinpoint precisely when this will occur. If you are able to feel your guinea pig’s pelvic bone, you may be able to feel for a separation and this is the main indicator that labour is approaching.

Yet, even with this, the actual birth could still be several days away. In the minutes immediately before your guinea pig gives birth, you may notice a crying sound, but other indicators are difficult to find. For this reason, you need to be prepared for the delivery to occur at any point within the 59 to 72 day range.

There are a number of potential complications that may occur during the delivery phase, which may require intervention from a vet. One example of this is the presence of too much blood in the birthing process. A small amount of blood can be considered normal, but if you have concerns about the amount of blood loss, seek help immediately.

Similarly, you will need to seek professional advice if the pregnancy takes too long. Guinea pig delivery is usually relatively quick, with each of the pups taking somewhere in the region of five minutes to be delivered. If you are concerned about the delivery time, or if the total delivery time exceeds one hour, you should call for assistance.

Finally, and sadly, without veterinary support, it is estimated that around 20 percent of all pregnant guinea pigs die in the post-delivery stage. Similarly, miscarriages do also occur. Unfortunately, this means that death during or immediately after labour is a relatively common complication and something you need to consider.

After the Birth of a Guinea Pig

Following the birth, the baby guinea pigs will need to stay with their mother, who will nurse them until they are able to feed independently. The precise timings for this can vary, but it is advisable for this to last around three weeks, before weaning by reducing the supply of milk and introducing the baby guinea pigs to their natural diet.

Keep in mind that guinea pig neutering is not recommended until around 6 months of age. It is, therefore, important that unneutered guinea pigs are separated after a couple of weeks, in order to avoid unwanted additional pregnancies.