The Complete Guide To Ferrets As Pets

Ferrets are one of the most misunderstood creatures in the pet world.

They’ve somehow gained a bad reputation they don’t deserve… some people even mistake them for dangerous wild animals!

This couldn’t be further from the truth.

We domesticated ferrets over 2,500 years ago, and they’ve been helping us out with hunting, controlling pests, and loneliness ever since!

This confusion probably comes from the fact that ferrets are part of the Mustelidae family of carnivorous mammals, a group that includes ferocious beasts like honey badgers and wolverines.

They’re not for everyone, though, because these small creatures require a ton of care and attention, similar to the amount you’d give to larger pets like dogs or cats.

So how can you decide if ferrets are right for you?

Just read through this blog post, and we’ll reveal everything you need to know about them — you’ll be able to make the call in about 15 minutes!

You might have some doubts when it comes to pet ferrets…

So let’s start our article with six reasons why they’re fantastic:

1. Pet ferrets are freaking adorable. Just look at that soft fur, those beady eyes, and that naughty little face… that’s enough to melt even the toughest of hearts.

2. Ferrets are incredible fun. They’re one of the most playful and joyous animals you can own as a pet, rivaling even a dog. If you don’t believe us, check out this video of ferrets going for a walk!

3. They’re really sociable and friendly. It’s best to keep ferrets in pairs so they can play and exercise together while you’re busy doing some stuff ferrets find boring.

4. Ferrets are surprisingly intelligent and cunning. You’ll surely end up marveling at how good they are at solving problems, puzzles, and games. They have the most inquisitive nature.

5. They’re small in size, ultra-quiet, and great sleepers. All of these traits are pretty handy if you’re looking for an indoor pet that won’t put you in the neighbors’ black book.

6. Like cats and rabbits, ferrets can be litter box trained. The benefits of this one are self-explanatory!

Have we won you over? Even just a little?

The History of Ferrets

We’ve already mentioned in the introduction that ferrets were domesticated a long, long time ago… about 2,500 years ago by the ancient Greeks, to be precise.

Since then, our species have been through thick and thin together, helping each other survive and thrive in this constantly changing world.

Most experts believe that the domesticated ferret (Mustela Putorius Furo) descends from the European polecat (Mustela putorius), but it’s still up for debate which exact polecat is their forefather.

The thing we know for sure is that ferrets proved themselves to be incredibly useful to people.

These quick, cunning animals were used for hunting small animals (an activity known as ‘ferreting’) and protecting crops and grain stores from the attacks of rodents.

From that point on, ferrets helped us guarantee our food reserves for millennia.

They conquered the rest of the world during the Age of Exploration and Mercantilism because sailors realized that ferrets could help control rat populations on ships, a massive problem at the time.

Ferrets reached North America in the 1700s and quickly took over their old jobs in the New World, too.

However, due to the introduction of chemicals to exterminate pests in the 20th century and the diminishing importance of hunting, ferrets faced some tough times.

But every cloud has a silver lining.

Animal lovers discovered them, and starting from the 1980s, they became popular pets.

Ferrets haven’t looked back since, preferring the warmth and snuggles of being a house pet to the harsh life of being a working animal!

But it isn’t just their lifestyle that’s improved…

It’s their looks too!

Ferrets now come in a wide range of fur colors and patterns (i.e., sable, chocolate, black, and white) thanks to the selective breeding efforts of owners.

Ferret As Pets : Behavior and Temperament

You can tell a lot about a ferret’s personality by investigating the origin of the word ‘ferret.’

It derives from the Latin word ‘furittus,’ which means ‘little thief.’

And the Romans were spot on — ferrets are mischievous little critters (their sneaky eyes say it all) with a passion for stealing and hiding small items they find interesting!

But don’t fret, it’s all in good fun, and it’s an important sign of your ferret being happy, healthy, and naturally curious.

In general, ferrets love playing, bouncing, and having a blast with their owners, other ferrets, or even the house dog and/or cat.

Definitely expect them to crawl through anything they can find, including paper bags, cardboard tubes, and your clothes.

They’re easily one of the most entertaining pets around; any owner can vouch!

Well, that is when they’re awake.

Because they take sleeping very seriously.

Pet ferrets usually spend between 14 and 18 hours a day napping in their cages— impressive stuff!

And with all that sleeping and playing on their schedules, it’s no wonder ferrets don’t fare well on their own…

They need a ferret buddy to frolic and snuggle with!

Ferrets are social animals. So stop them from getting lonely by keeping more than one ferret, either in a pair or a small group.

You’ll also have double or triple the fun getting to know each one’s unique personality and watching them become inseparable.

They sometimes play rough and nip, but rest assured that ferrets can be trained to play nice with a bit of patience.

But, because of this trait and their fragile bodies, we don’t recommend ferrets as pets for people with young children in the home. You should stick to other small animals like a guinea pig, or a dog or cat, until your kids are a bit older; it’ll be worth the wait!

Taking Care of Your Pet Ferret

Ferrets can be a handful at times, especially for new ferret owners.

But with the proper preparation and knowledge, caring for pet ferrets becomes easy peasy.

Let’s show you the ropes!

The first thing on your mind should be a proper ferret enclosure.

A cage provides your pet with a safe, cozy space to spend the majority of their day in — particularly important for when you’re away, or they’re napping!

There are many ferret cages on the market, so you have to be careful when deciding on which one to bring home. You’ll make a solid choice if you go for a wire cage with these characteristics:

Two great options are the MidWest Ferret Nation  and the YAHEETECH Small Animal Cage  — both are readily available online and work great for a pet ferret.

Once you get your cage, you should place it in a cool part of your house away from direct sunlight and then…

Get your ferrets a few accessories to make their home a little bit more exciting!

We suggest things like hammocks, a sleeping pod, a bunch of toys, and litter boxes or litter trays.

Why more than one litter box?

Because ferrets do their business frequently due to short gastrointestinal tracts — a litter box in every room helps avoid accidents!

Exercise in a Ferret-Proofed Home

No matter how cool their cage is, ferrets need an hour or two of supervised exercise time outside of it every day.

It’s great for their physical and mental health, as well as being a fun bonding opportunity.

But before you let them out, make sure to ferret proof your home by doing the following things:

In other words, they have to eat meat. Veggies, fruits, and grains just won’t do!

You have three options when it comes to pet ferret food.

To supplement their diets with extra nutrients and tasty treats, you can give your ferret things like cooked meat, eggs, and fish. They’ll love it!

You’ll also need to ensure your pets have constant access to food as they’re programmed to eat about every three to four hours due to a high metabolism and short digestive tracts.

And of course, don’t forget to keep your ferret’s bowl full of fresh water!

Ferrets are a healthy and hardy pet, as long as you’re feeding them a proper diet and ensuring they’re getting enough exercise.

They also live a relativley long time — a pet ferret has an average lifespan of five to ten years of age, but some can make it all the way to fifteen!

But, they do come with several extra health requirements when compared to other pets.

Ferrets can catch and spread rabies. They are actually prohibited in states such as, Hawaii and New York. Its worth checking if you live in a state that outlaws them being owned as pets. Even where ferrets can be kept as pets, pet owners are sometimes required by law to have their pets vaccinated for rabies at 4-5 months of age, and then get annual booster vaccines there after.

Ferrets are also prone to distemper viruses that are again preventable through vaccination. This extra upkeep might not always ideal for new pet owners.

It’s always a good idea for owners to be aware of ferrets’ specific health issues, so you can catch them early on.

It’s best practice to take your pet ferret to the veterinarian once a year for a regular check-up because they can provide preventive screening and sound medical advice!

Aside from this, you should also clean their ears once a month and cut their nails every two weeks — ask your vet to show you how the next time you’re there!

Neutering or spaying your ferrets after they reach sexual maturity (around 6-12 months of age) is an essential consideration for ferret owners. There are three reasons why:

Once these glands are gone, neutered ferrets only have a mild smell caused by the natural oils in their skin. It won’t bother you as it’s neither overpowering nor offensive — just don’t bathe them too often as this can worsen the smell!

Before making any decision, consult your vet to help you pinpoint the right procedure for your specific kits (young ferrets)!

Ferrets and the Law

We have a bit of bad news. Well, for some of you.

For others, it’ll just be surprising!

Ferrets are banned in certain countries and cities.

We know it’s not fair, but unfortunately, you can’t get a pet ferret in:

Hopefully, these laws change soon, but until then, you’ll have to move to a new area if you’re set on the idea of a ferret buddy!

You should also be aware that a few other places require you, as a ferret owner, to register and/or microchip your pets. These include:

To play it safe, we suggest checking your local government’s website or speaking to someone knowledgeable about this issue BEFORE you adopt an adorable pet ferret.

Final Thoughts on Ferrets As Pets

If you haven’t noticed by now, we think ferrets are wonderful pets.

And we really hope to have improved their reputation by writing this article — they thoroughly deserve a place in the pantheon of our favorite pets!

If you’re up for the rewarding but time-consuming commitment of becoming a ferret owner, these small animals are sure to bring you and your family an incredible amount of joy!

All the jumping, playing, running, and general cheekiness will make you smile for many years to come…

So have a blast, and spread the word to other animal owners! ❤️ 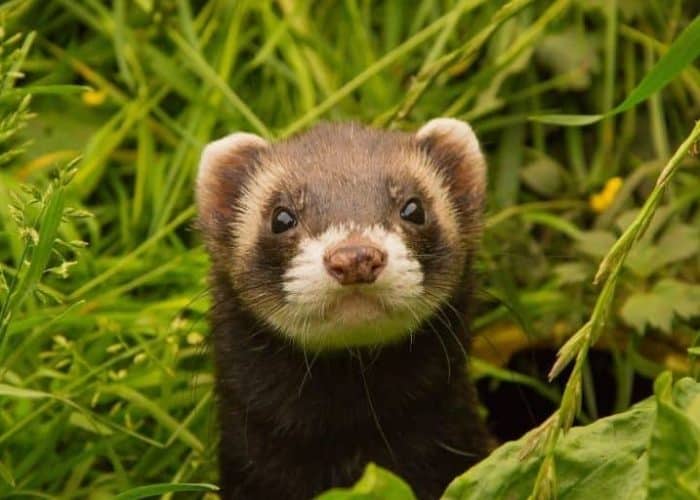 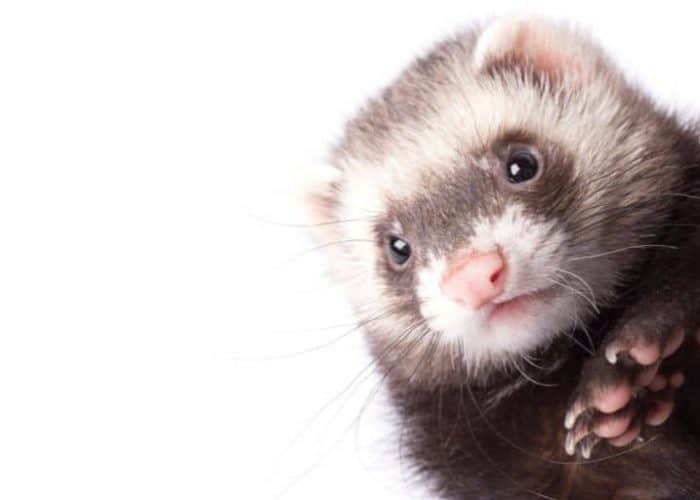