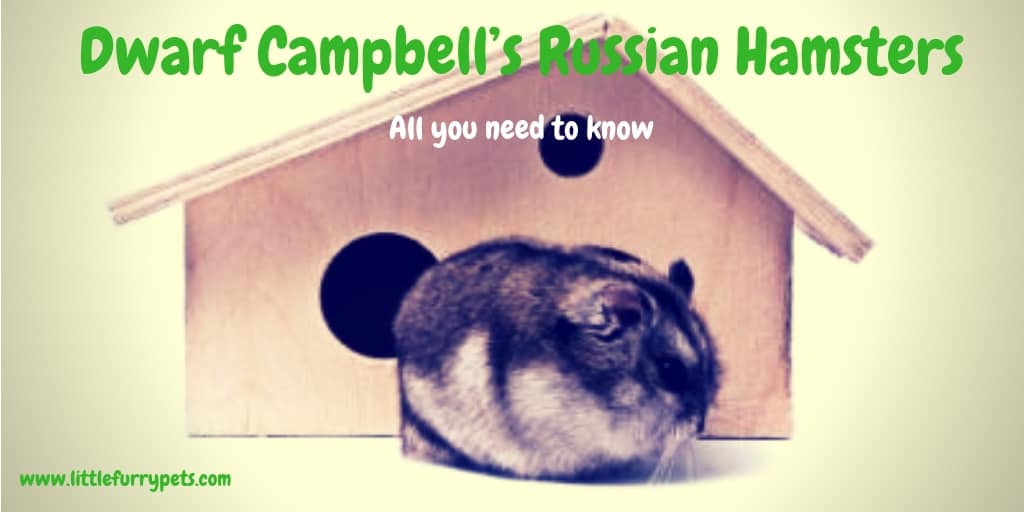 Phodopus campbelli or the Dwarf Campbell’s Russian hamster are endearing little creatures. Highly sociable across its own breed and a popular choice with hamster enthusiasts. If you are thinking about keeping these hamsters, check out the following information on what you need to know to start your hamster adventure.

This hamster breed’s natural habitat is the steppe regions across central Asia which encompass Russia, China, and Mongolia, where they thrive in semi-arid environments.

They earned their name from C W Campbell, a naturalist who collected the first recorded hamster over a century ago. They live in captivity on average between 2 to 2.5 years – lifespans are much briefer in the wild.

Proficient diggers, they live in burrows comprising up to 6 intersecting tunnels, both vertical and horizontal. They are also known as the Djungarian, Siberian or Campbell’s hamster. Or a far cuter name is the striped hairy-footed hamster!

Caution needs to be applied with terminology, however, which will be discussed further in the text.

In general, captive hamsters have greyish brown hair on the body, with a vertical black stripe over the spine. Creamier colored fur often features along the hamsters flanks, and the abdomen is notably white.

True to their name, these hamsters do indeed have white, hairy feet. Essentially, nature’s boots which help the breed retain heat when living in colder habitats. It’s important to note these hamsters do not turn white during winter months, retaining its greyish hue for life.

Although smaller in the wild, size in captivity averages 10 cm from head to tail base – tails average 0.5 cm. It’s thought the size variation of these dwarf hamsters in captivity is attributable to the nutritional benefits of commercial hamster foodstuffs.

Unlike in the wild, captive dwarf russian hamsters will breed throughout the seasons and females generally become fertile between 2 and 4 months old. Females and males hamsters may fight prior to mating and gestation periods usually are between 18 to 20 days. Litters tend to range from 4 to 8 pups – be aware that they have been recorded producing up to fourteen per litter!

The young develop very quickly, achieving half the size of the adult hamsters within a month.

Like other dwarf hamster breeds, they can be kept in same-sex groups and most successfully if they have been reared together.

Be vigilant for changes in behavior, notably aggression and bullying – it’s important to separate these hamsters immediately to avoid the risk of injuries.

They make beguiling little pets, and it’s no surprise they’re one of the most popular dwarf hamsters to keep. It’s worth noting their agility, being very industrious and quick – with this in mind, they might not be the best pets for younger children.

Although they can be tamed, it’s not unknown for this breed to deliver a few sharp nips if anxious. That said, with regular handling, they prove fairly benign.

A crepuscular breed, they are more active at dawn and dusk but they can be out and about during the day on occasion.

In the wild, these dwarf hamsters live in burrows, and captive hamsters will keep themselves busy happily digging and tunneling.

Most quality commercial hamster foods meet sufficient nutritional needs to provide optimum health and energy for your Dwarf Campbell’s Russian Hamster. That said, there are a few notable caveats to be aware of for this breed. Avoid milk due to lactose intolerance as well as dark vegetables, with the exception of kale, because of water content. Obviously, any kind of candy or chocolate shouldn’t be offered to your hamster, and never feed them onions or garlic as these are highly toxic. Ensure there is a supply of fresh water, replenished daily, and the diet can be supplemented with fresh fruit and vegetables – wild plants are fine, such as yarrow and dandelions. For protein, opt for mealworms, locusts and even very small pieces of cooked chicken. Do a little diet research and you won’t go far wrong.

As small hamsters, standard cages might prove problematic in stopping escapees. An aquarium is a good alternative, as they are roomy and offer the facility for lots of bedding where your hamster can tunnel and burrow. Cages with solid sides are acceptable, as long as the lid is secure and the unit is airy. These cages need cleaning more regularly due to ammonia build-up from reduced ventilation. The Campbells dwarf Russian Hamster is a breed that needs warmth so site the enclosure away from draughts and chilly rooms. Commercial shavings are suitable for lining, apart from cedar and pine which can be harmful. Supply a wheel for active little bodies, with tunnels for burrowing and hiding places.

For more information on the best Hamster cages available, check out our guide Best Hamster Cages

The Dwarf Campbell’s Russian hamster is often mistaken for what is referred to as winter white hamsters. In truth, they’re distinct species. The winter whites are otherwise accurately known as Siberian or Djungerian hamsters. Non-captives change to white in winter but domesticated hamsters do not because of exposure to light and heat. Only Campbell dwarfs crossed with Djungerians can breed and produce hybrids. Enthusiasts have created several color variations within the hybrid variety.

These hybrids certainly make rewarding pets but there can be health issues – to ensure the survival of both species, it’s important the genetic profile remains as pure as possible. Be sure you are actually purchasing a pure Campbell’s dwarf rather than a hybrid, mindful that you won’t be getting a hamster that turns winter white.

Observing these charming, hyperactive hamsters on their wheels is one of the many joys of keeping this breed. Once tamed, they are very manageable – just apply a few basics such as handling for short periods so they get used to your scent, and do this regularly. Use a container like a cup to initially handle them, taking into account their size and nippy reputation. Finally, owning Dwarf Campbell Russian hamsters is something you certainly won’t regret.