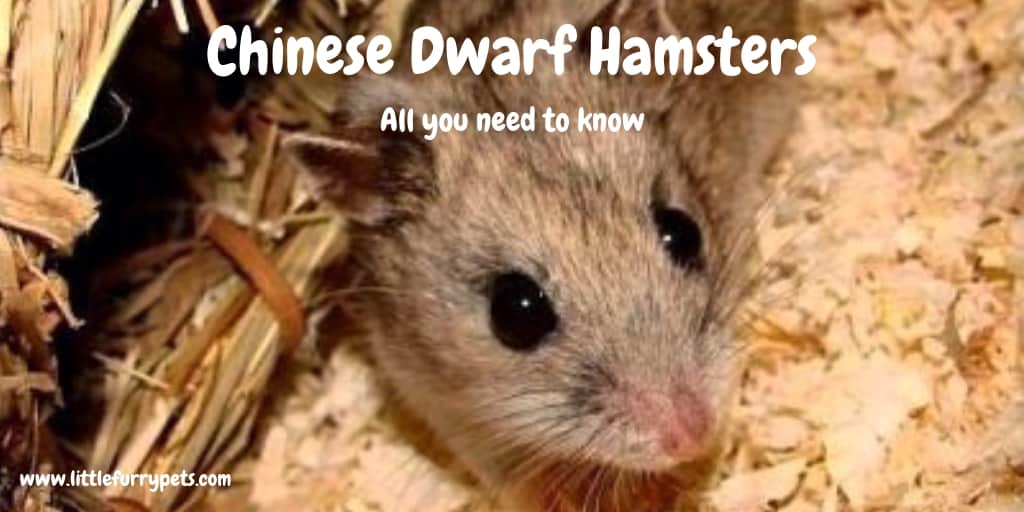 This breed can be found in the arid steppe regions of Mongolia and in northern China, where they thrive in desert habitats.

The general consensus among enthusiasts is that although they share notable similarities with the Russian dwarf hamster, the Chinese breed isn’t strictly a dwarf hamster. Despite this anomaly, their size alone suggests they can be considered as such!

They can grow anywhere between 8.2 cm up to 12.7 cm in the body while attaining an adult weight of 45 gm – the babies average 1.7 gm as a birth weight.

Tail lengths tend to range from 2 cm to 3.3 cm. In comparison to other hamster types, the breed has a slender body, with longer tails relative to their size. Indeed, there is a notable resemblance to mice, although the breed is included in the ‘ratlike hamsters‘ group.

Whether wild or domesticated, the Chinese dwarf hamster has brown fur and displays a strong black stripe over the spine – they also tend to have black-grey flecks, with an off-white abdomen. There are 2 variations, the most common the dominant spot, wherein the fur is mainly white with flecks of greyish brown. The other is known as the black-eyed white and is a particularly rare variant; only a small number are kept by enthusiasts.

This breed will happily munch on hamster-formulated food mix and they also enjoy a range of vegetables and fruits, supplemented with seeds, nuts, and occasional bread. As with all the dwarfs, it’s important to avoid foodstuffs that are potentially toxic – examples include avocados, almonds, foods with high acidity and sugar content. The obvious junk such as chocolate and crisps, etc, shouldn’t be fed to hamsters. It’s worth taking time to research diet when keeping dwarf hamsters – diabetes has been observed in this breed.

As with all hamsters, ensure there is a plentiful supply of water, changed daily to avoid cross-contamination with cage detritus. In accordance with hamster foraging behavior, put pieces of food in various areas of the enclosure. If these have been uneaten after a day or so, remove from the cage for disposal, especially perishables.

Same-sex pairs and groups can work well with this breed – obviously, avoid mixing unless you intend starting a hamster dynasty! Both male and female only pairs/groups live together without fuss, although you should always separate whenever aggression occurs. There is some thinking that male-only pairs/groups work better but, in truth, females only is a perfectly acceptable option – play-fighting and social grooming is a component of the rough and tumble of the breed’s character. Moreover, females often develop strong bonds and vocalize through squeaks.

As with other dwarf breeds, the males have a notable gap from scrotum to anus, with the scrotum being relatively large. The gap is much smaller in females, appearing like one aperture. Hamster gestation averages between 18 and 30 days, with litters usually containing 5-6 pups.

There are a wide variety of cages available, and plenty of enthusiasts make their own from scratch. Aquariums are also popular – they can prove cheaper than cages, there’s capacity to store lots of bedding, and they have nooks and crannies for hiding. The essential rule to keep in mind is the bigger the better, with one very important caveat. This breed is very small, so check the cage gaps are escape-proof. Otherwise, a cage of around 61 cm x 31 cm, with a height no shorter than 30 cm, should give your hamster ample scope to forage, explore and exercise. Ultimately, the best enclosures should offer a safe and happy environment to help your little critters thrive.

Keep the cage in an airy space, avoiding direct sunlight – this breed is not keen on getting a suntan, so shade is necessary. Bedding can comprise wood shavings as long as they aren’t cedar or pine because they can irritate your hamster’s respiratory system. For this reason, always check the content on purchased shavings. Stay clear of scented bedding, but most commercially available bedding is fine. Don’t forget to add a wheel to keep busybodies active and stimulated, as well as other accessories like tubing.

Check out our Guide to hamster cages for more information on the cages available.

It’s an unequivocal yes! Although the breed can be initially nervous – usually when very young, with a tendency to nip – they can be tamed quickly. Their temperament is endearing, with the capacity for much affection, with sweet aspects to their behavior. An example is their ability to cling with their paws to a finger, much in the manner of a harvest mouse’s prehensile tail on corn strands. Once tamed, they can display a calm and docile nature, proving a very rewarding little pet.

There’s no doubt that this hamster breed makes a charming little pet. Indeed, once the basics have been put in place and some research applied to diet and environment, they are relatively easy to maintain. A further advantage is its gentle character, offering opportunities to develop loving bonds with your pet.