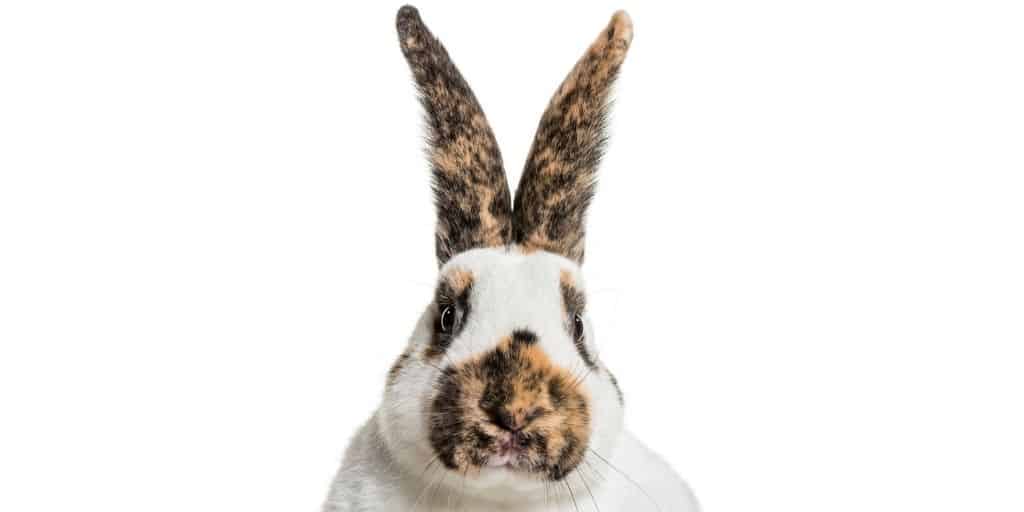 But there’s another often-overlooked trait we feel they deserve to be known for:

Let’s find out more about this rabbit breed and its typical characteristics!

The Checkered Giant rabbit has been around for a long time, ever since the nineteenth century! Their exact origin is disputed, but here’s what likely happened:

Checkered Giant rabbits originated in either the Lorraine region of France or in Germany. Here, Flemish Giants, large French Lops, and spotted rabbits were crossed to create the Checkered Giant breed’s ancestor, the ‘Land Kaninchen.’

This new breed was then bred back to Flemish Giant rabbits to increase their size, resulting in the ‘Great Lorrainese rabbit‘ (a.k.a. the ‘Great German Spotted rabbit‘). These bunnies were similar in size and shape to the modern Checkered Giant rabbit breed but lacked markings.

That all changed in 1904 when a German rabbit breeder called Otto Reinhardt decided to cross a Great Lorrainese with a black Flemish Giant. The exquisite Checkered Giant rabbit was born, and they quickly became famous across France and Europe! The rabbit breed was affectionately called Giant Papillon in honor of their French origins and their butterfly-shaped nose marking.

It only took until 1910 for Checkered Giants to arrive in the United States, where they instantly proved popular with breeders for show purposes. So much so that they were officially recognized merely nine years later by the American Rabbit Breeders Association as the American Checkered Giant Rabbit.

From that moment on, their popularity has continued to soar, and the rest, as they say, is history!

Checkered Giant rabbits are truly stunning — they were even nicknamed ‘the rabbit beautiful‘ by the ARBA organization in 2019. Not bad for a breed initially intended to be a meat rabbit!

Just look for yourself:

A Checkered Giant rabbit is easily identified by these characteristics:

It’s no secret that the Checkered Giant rabbit breed is one of the largest in the bunny world!

The minimum weight of an adult Checkered rabbit is 5kg (11lb), but they’re known to exceed 6kg (13lb) in weight. That’s one big bunny!

A Checkered Giant rabbit has short, dense fur that’s extraordinarily soft and smooth. It’s also easy to maintain — just use a quality rabbit brush and groom them once a week during a cuddling session!

But be careful, this doesn’t mean that they’re entirely black or blue… their coat is primarily white! The colors refer solely to their distinctive fur markings; a trait only found in one other breed: English Spots, a mini-me version of this giant rabbit.

A show-worthy American Checkered Giant rabbit should have the following colored marks:

We have some great information for Checkered rabbit owners:

This giant rabbit breed is very healthy and hardy — they can live in any climate, and they don’t suffer from hereditary diseases. This means that they can live up to 10 years when lovingly kept as a pet.

P.S. Don’t forget to check your rabbit for typical bunny health issues every couple of months!

A Checkered Giant rabbit has a calm, friendly temperament and gets along well with people, making them an excellent choice for a pet.

However, they aren’t famous for being affectionate and cuddly as they prefer to socialize from a bit of a distance. We suspect it’s because Checkered rabbits are a super lively ‘running breed‘ that constantly needs to be on the move.

The only real downside to this giant rabbit breed is that they can sometimes act aggressively. This happens when they don’t get enough exercise or companionship, so please keep this in mind before you go out and get a Checkered Giant rabbit!

Caring for a Checkered Giant Rabbit

It’s surprisingly easy to care for a Checkered Giant rabbit — they can live indoors or outdoors, and there’s only one special thing they absolutely need:

Loads and loads of room.

This a large rabbit with a crazy amount of energy, so they must have space to run around, jump and binky! Get them the largest bunny cage (or hutch) you can find, and let them roam free for at least 3-4 hours each day. Ideally, they should be out and about in a rabbit-safe environment whenever you’re home.

They also eat considerably more than other smaller breeds, so expect to be buying Timothy hay in bulk! 70% of their diet should consist of this type of hay, while the remaining 30% should be primarily fresh leafy greens, veggies, and a small amount of rabbit pellets. And, of course, give your rabbit plenty of water as they’ll get thirsty from all the running about!

Checkered Giant rabbits are a fantastic bunny breed thanks to their striking good looks, calm temperament, and hardy health. We highly recommend this rabbit for anyone that has a large home (or garden) with enough space for them to run around and roam freely!