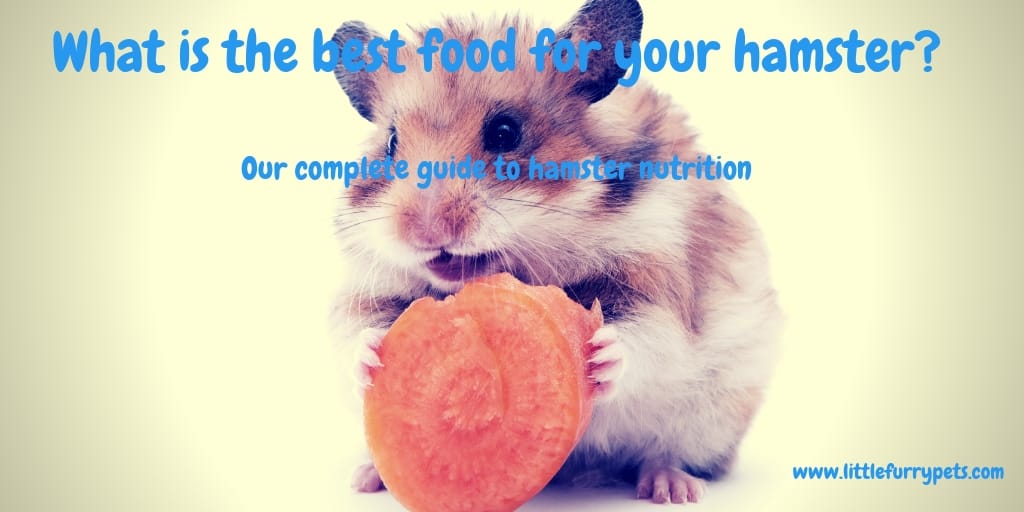 If you’re thinking about getting one of these adorable critters, diet is one of the most important elements for optimal health. There’s no lack of data about what do hamsters eat, and the best hamster food, and it may seem overwhelming. The following information sets out the principles of hamster nutrition, tips on how much and when to feed your hamster, as well as the best hamster food. Providing a varied diet may contribute to longevity, and will give your hamster the best chance to enjoy a healthy life.

All hamsters are omnivores – this means that their teeth and digestive tract are designed to consume both protein and plant-based foods. This is how they differ from true herbivores, despite the fact that hamster diets are largely plant-based. Their digestive tracts are able to break down small quantities of fiber and protein and, in combination with fruit and vegetables, hamsters can enjoy a varied diet.

Wild hamster habitat is usually in steppe or semi-arid regions and their diet has adapted so they can thrive under harsh conditions. Wild hamsters will consume foodstuffs found in drier regions, which include grasses and grains, as well as seeds and invertebrates. This is an important factor to consider when feeding your hamster because they will benefit from a similarly natural diet. It would be unusual to see obese hamsters in the wild and their captive cousins will have healthier lives if overfeeding is avoided.

How and when do hamsters eat?

Hamsters are renowned for their plump cheeks – this is one of their most endearing attributes. They store food in their cheek pouches, and it’s even been known for females to store their young in them! Despite the cute quality to pouching, there can be a risk of overfeeding. For instance, some hamsters will tug on your heartstrings and beg for food, despite plump cheek pouches. They will, in due course, eat the contents of their pouches – just as they likely will with food stored in their enclosure. Resist the temptation to feed again until the pouches are empty, and check there’s no food hidden. However, it’s important to feed your hamster with fresh food daily, so remove any stale food.

When to feed your hamster is a debatable point amongst enthusiasts – some opt for evening feeds when hamsters are very active. It’s true that wild hamsters will emerge from their burrows in the evening to feed – a survival tactic to avoid being predated. They will store food in their cheek pouches to be eaten later, often waking during the daytime to feed. In tune with natural behavior, it’s a good idea to allow your hamster to feed throughout the day. Provide sufficient food for them to do this.

This can depend on the species type. So, for example, the dwarf hamsters are notable for their high metabolic rate – they might eat up to 20g of dried hamster food daily [in two 10g servings]. Take this figure as the average for other species, including the bigger ones. Feed a tablespoon of dried food each day and you won’t go far wrong. The key point is to be vigilant as to how much your hamster is eating because it will vary. Some will have bigger appetites than others, and there is cheek pouching to factor in. Be mindful that any ‘extra’ food might be hidden, which could result in an overweight pet!

There are a few things to look out for when purchasing hamster mix but, generally, these will provide your hamster with a good nutritional base. One of these is whether to opt for muesli or pellets – essentially, both are fine. Some vets recommend the pelleted food that comes as square blocks for the hamster to nibble on. The reasoning behind this is to avoid hamsters only eating the tastier morsels from muesli type mixtures and, potentially, ignoring the nutritional seeds. It’s a personal preference, as muesli mix can work very well, although avoid mixes with strong colors – they could contain additives.

As omnivores, hamsters enjoy nibbling on plant-based foods and there are some common foods that come with a few caveats. There are lots of pictures of hamsters eating a grape – a nice treat. However, it’s a good idea not to feed your hamster a whole grape because of the fruit’s sugar content. Too much can give your hamster an upset tummy. Cut into small sizes, adapting how much you give depending on the type of hamster you have [note that dwarf hamsters have quick metabolisms].

Hamsters usually love carrots but, like grapes and anything else suitable for them, feed in small quantities. Their sugar content can cause digestive upsets and, indeed, might be best avoided for dwarf hamsters because they can develop diabetes.

Tomatoes might look enticing for hamsters but their chemical makeup could prove toxic to them. It’s because the plant is part of the nightshade genus, and produces an alkaloid that has been known to cause health problems. Although toxicity is unproven, it’s worth avoiding tomatoes so opt for those foods that are 100% safe.

So what do hamsters eat?

Hamsters can also eat sunflower seeds and plants like alfalfa and chicory – oats are fine for fiber. Replenish water daily. Spend a bit of time researching their diet and you’ll have a flourishing little hamster!