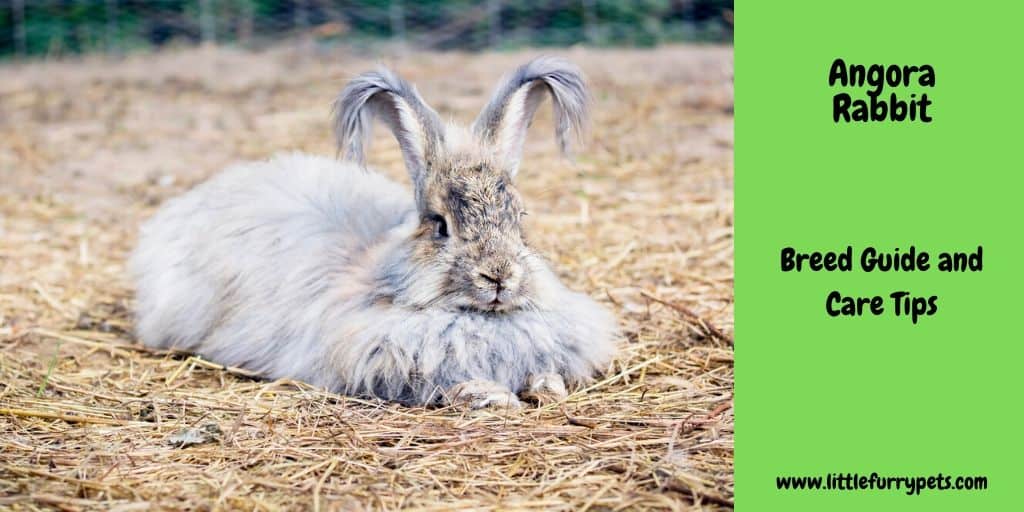 The angora rabbit is perhaps one of the oldest and most sought after rabbit breeds in the world. These rabbits are said to have descended from Ankara, the capital of modern day Turkey. At the time, the area was known as Ancyra and Angora, hence the breed name. These rabbits were imported to France way back in 1723.

The Angora became a very popular pet for French royalty to have and by the end of the 18th century their popularity had spread to most other parts of Europe. They arrived in America in the 20th century but it wasn’t until World War Two that they were bred at a much higher rate. This was to meet the fast growing demand for Angora wool.

Whilst Angora rabbits are kept as pets by millions of people all over the world, they are still also bred for their fur too. Their fur is cashmere like in quality and highly sought after. The fur is collected by plucking or sheering.

An Overall Description of Angora Rabbits

The Angora rabbit is instantly recognizable thanks to it’s very woolly coat. Typically they resemble large balls of fur. The appearance of an Angora will vary significantly because there are actually several different varieties of the breed and each have their own specific set of features. Typically, all varieties of the Angora are fairly rounded in shape.

When most people think of the Angora, the only color that comes to mind is the typical ruby eyed white rabbit. However, this is only one of many colors. In fact, there are a number of different varieties including, but not limited to: Lynx, opal, black, chocolate, blue, seal, sable, pearl, steel and so many others. There are certain colors which are only found in certain Angoras.

It was once the case that the Angora was only really bred for showing purposes or for wool production. However, they can actually make very good pets for the family home. Their temperament is actually very gentle and docile. They enjoy giving and receiving affection, although like most rabbits, they don’t particularly enjoy being picked up. It is important to be extra cautious with the Angora because they have very delicate spines. The Angora is highly intelligent and is known to enjoy playing with toys and can be trained very easily. They may, however, display aggressive behaviour if they are frightened which is true of all rabbit breeds.

If you are looking for a pet rabbit then the Angora may be your perfect companion. As we have already mentioned above, they are naturally very gentle creatures who love human interaction and affection. However, there are a few points to keep in mind before you make the decision to get an Angora. First of all, this breed has especially delicate spines. This makes them unsuitable for young children who may accidentally squeeze them when handling them.

Secondly, it is very important to keep in mind that this rabbit breed requires daily grooming and it is something that you have to be very strict with for the sake of the rabbit’s health. Caring for an Angora is a big responsibility and one that requires an incredible amount of commitment.

How Long Do Angora rabbits Live?

Many people wrongly assume that Angoras have shorter life spans. Granted, there are certain health conditions which the Angora is more susceptible to than other breeds, but with the right living conditions and care, this rabbit breed has a life expectancy of between 5 to 8 years.

As we mentioned further up the page, there are actually a number of recognized varieties of the Angora; each of which has their own set of unique features. To help you recognize them, read on below for a little information about each of the different varieties.

The English angora rabbit is the smallest variety of the breed. It is also one of the most popular for showing purposes. This is largely due to the very unique “furnishings” that it has around its’ face and ears. At full maturity, the English angora rabbit weighs between 5 and 7.5 pounds and is fairly medium in stature. They require daily grooming to remain healthy.

Weighing between 7.5 and 10.5 pounds is the French Angora rabbit. These bunnies are quite unique in appearance. They don’t have the furnishings of the English Angora, but they do have an incredible straight woolly coat. If you are completely new to owning an Angora, then the French Angora rabbit is a great starter breed because they are not quite as high maintenance as some of the others. They naturally shed their coats so the wool can be collected via plucking rather than shearing.

The Satin Angora rabbit looks much more like what most people picture when thinking of a pet rabbit. However, it has an incredibly silky, glossy coat that makes it’s wool highly unique and very sought after. The Satin Angora rabbit came about through breeding a French Angora and a Satin rabbit. They can weigh between 6.5 and 10 pounds.

The German Angora rabbit are actually not recognized by the ARBA. However, they are still very popular as pets. The German Angora rabbit are is not too dissimilar to the English angora. They have the same furnishings on the ears, though not as obvious. These bunnies weigh between 7.5 to 11 pounds and can grow to be quite large. They are also popular because they can produce huge amounts of wool per year.

How PETA Won the Angora Debate

There has always been huge amounts of debate over the use of angora rabbit fur in fashion. In 2013, PETA organised a campaign which aimed to convince hundreds of brands to stop using angora rabbit fur in their products. As part of their campaign, they released a harrowing video of an angora in China being treated appallingly through mutilation and torture, all for the sole purpose of harvesting it’s wool. This horrific video thankfully prompted many major brands including Calvin Klein and Ralph Lauren to suspend their use of angora. Many other brands followed and a lot of them have since banned the use of angora fur completely.

Dental disease is a health problem that all rabbits are susceptible to; some more than others. Unfortunately, Angora’s are not exempt. If you notice that your angora is off their food, or they are drooling, then you should take them to the vets straight away. These are big red flags that suggest that there is some sort of dental problem going on and it needs to be examined by a vet straight away.

Parasites are a big risk for many different rabbit breeds. There are certain parasites that will be more of a risk to particular breeds. For angoras, the main parasitic concern would be flystrike. This is where flies land on rabbits and lay their eggs which leads to a maggot infestation. This parasite can make your angora very unwell, so prompt treatment is essential.; flystrike tends to happen when a rabbit is already unwell and not grooming themselves properly, so it is important to find the underlying cause.

VHD is a real cause for concern amongst all rabbit breeds, including angoras. This can cause swelling, fever, loss of appetite and even myxomatosis. This is why it is incredibly important that you make sure that your angora is up to date with their vaccinations. This is the only way that you are able to prevent them from contracting things like VHD.

As we mentioned earlier in our post, angoras have especially fragile spines. It is for this reason that they are not ideal rabbits to have as pets if you have young children, as one drop could potentially break their spine. It is also very important that you are extremely careful when handling your angora for the same reason.

One of the major issues that angoras face is bladder stones. The majority of animals will only take in as much calcium as they actually need. However, this is not the case with rabbits. They get rid of calcium through their bladders. Unfortunately, this can often lead to a build up of calcium leading to calcium stones.

Caring for your Angora Rabbit

One thing that you can definitely be certain of is that angoras require an incredible amount of grooming. It is important that they are groomed every single day. If they are not, they can get mats which can cause serious health problems. This breed of rabbit is a huge commitment, so only get one if you are able to dedicate the time and care that it is going to need.

This video will help if you are new to grooming Angora rabbits!

Ideally, the angora should be an indoor rabbit. They fare far better indoors and they really enjoy human interaction. However, it is very important that you make sure that you have the correct type of bedding for them. Paper based is usually recommended because things like sawdust are not only bad for breathing but will also cause huge problems with their coats.

The diet that you should be feeding your angora is the same as most other rabbit breeds. Ideally, they should be consuming at least their body weight in straw every day with a couple of hand fulls of fresh rabbit friendly vegetables and one to two tablespoons of rabbit nuggets every day. It is also very important that they have unlimited access to fresh, clean water.

When it comes to exercise, the angora should be able to run around at least once a day. However, they are fairly laid back rabbits. Interaction is very important for the angora. They thrive off of affection and human interaction and they love to play, especially with cat toys. You will also need to be prepared to build a bond with them by doing things such as daily grooming.

We hope that you have found our guide on the angora helpful and that you will enjoy spending many years with your furry friend.