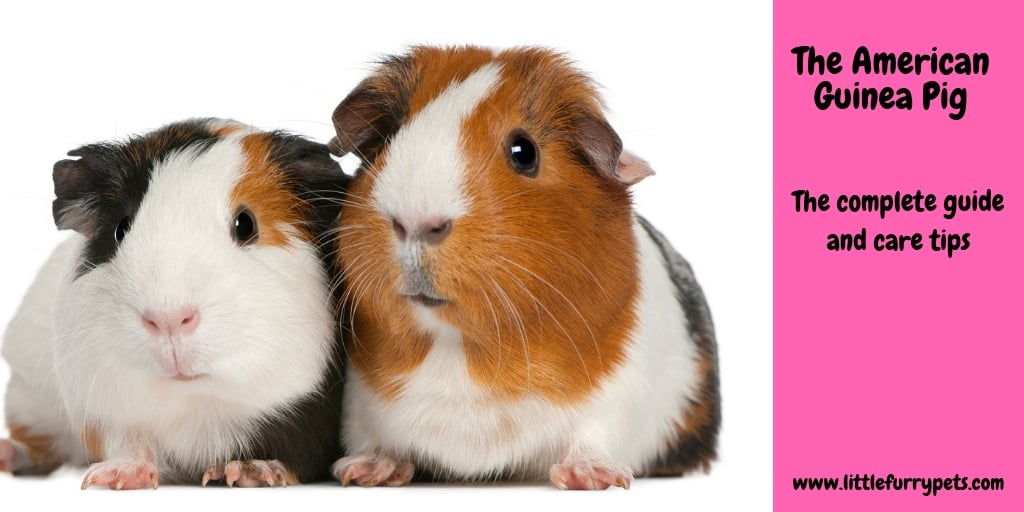 What are American Guinea pigs?

If anyone is asked their idea of a guinea pig, chances are they’d be thinking of the American guinea pig.

This breed is iconic because it’s the standard pig that enjoys worldwide appeal. Hardly surprising considering it’s the oldest guinea pig breed, with a timeless, special place in the hearts of hobbyists and breeders alike.

Images and videos across the web that feature guinea pigs will, most commonly, feature the American breed.

So perhaps you’re looking for a guinea pig that’s affectionate and easy to care for? Read on to learn what you need to know about the most popular breed of them all – the American guinea pig!

The origin of the name is likely derived from the continent they hail from – South America – but they can be named dependent on the country, for example, the English guinea pig.

That said, the usual name is the American guinea pig so we’ll stick with that.

They share several characteristics including social habits and dusk/dawn activity. Our playful and goofy critters were a staple diet across the Andean highlands. Countries including Peru and Ecuador still farm and eat them, while guinea pigs retain their regional importance in mythology and medicine.

When European traders returned home from their mercantile travels, they brought guinea pigs with them and the little critters soon became firm fixtures as beloved pets.

This all adds up to the American Guinea Pig being one of the oldest known breed, and one of the founding member breeds of the ARBA/ACBA boards.

The guinea pigs we keep as pets today belongs to the genus Cavia porcellus, which don’t occur naturally in wild habitats. It’s probably their wild cousins, Cavia , that our cute pets originate from.

The American guinea pig has a stocky, solid look to it – no fancy rosettes or long hair, just a standard furry critter with tons of charm.

The hair is short and sleek, with little ear flaps that add to the cuddly effect. Like all Guinea Pigs, the American Guinea pig is considered but does and a small stumpy tail which is hidden its fur.

They grow up to 10inches on average, although some will be smaller/bigger depending on the individual, somewhere between the 8-12inch range.

Weight can be between 1-3lbs, again halfway at around 2lbs beingthe average. The male boar guinea pig will typically weight more the female.

This breed has such a friendly disposition it seems it was made for new hobbyists, kids and adults – that’s everyone, in other words!

The term ‘clownish’ is often applied to these guinea pigs because of their antics when at play. The American guinea pig has a very confident temperament, making it a universally popular pet. It’s a rare one that nips fingers, and plenty of human interaction, fun and exercise.

This breed is comfortable being handled – just add gentleness and you’ll make a fast friend. Like most guinea pigs, does well in same-sex pairings or small groups. If you’re lone pet, you’ll need to have plenty playtime to keep your stimulated.

8 to 10 years is the average life span of the American guinea if cared for correctly. More details on the life expectancy of the Guinea Pig can be found here

As the breed is generally long-lived – a lengthy commitment to your pet, even low maintenance ones like the American, is required. They’re suitable for even the busiest lifestyles but that you get a same-sex pairing for company, if you’re work for instance.

As the guinea pig is short-haired, hair care is easy – you’ll still need to brush lightly each week for removing detritus to maintain condition.

When you’re doing the weekly buffing, take the opportunity to check for any possible issues – make sure all is okay with eyes, ears, skin and bum! If you’ve any concerns, consult with a vet and also ensure your critter’s nails don’t get overlong while you’re at it.

The domesticated pets are slightly removed from the original guinea pig cousins still found in the wild. In the wild, the distant relatives of the American Guinea Pig will happily live in a verity of environment, from mountain grasslands and savannas to forests and bush.

The Amercian guinea pig doesn’t differ from most other breeds as far as diet goes. It’s vital they’re kept hydrated so provide fresh water daily – a bowl or drip-feeder are both fine. Opt for good quality proprietary guinea pig pellets – fortified with essential Vitamin C – balanced with small pieces of leafy vegetables, plus carrots and some fruits.

Here’s a brief list of what’s good and not so good to give you some ideas. Do a bit of research and you won’t go far wrong.

In general, A guinea pigs are robust, healthy little guys – they’re so boisterous, it’s just as well they’re sturdy. Even so, consult a vet if your critter has diarrhoea – dehydration is dangerous to guinea pigs – or any lumps/bumps you’re not sure about.

The vet can then offer diet and health advice according to the needs of your pet.

The American Guinea Pig is susceptible to similar health issues to most other breeds. To keep your American guinea pig in the best condition its important to keep a daily check on them when at all possible.

But again, our advice is always the same – Any questions or worries, please consult you professional.

Like all Guinea Pigs, the American Guinea Pig needs to source vitamin C from its diet.

The bulk of your pets diets will be made up of pellet feed, and most good brands on the market contain added vitamin c.

Vegetables and Fruit are also a good way to supplement vitamin C intake.

Problems associated with vitamin c in Guinea Pigs come in the form of a poor condition coat and problems with teeth and joints.

Bad hygiene and poor living conditions can result in skin problems for your pet. Whilst these are all treatable, the most important point we can make is that they are AVOIDABLE if you care for your guinea pig in the correct way.

Mites, fleas, and lice all cause itching, so if you notice your pet is scratching more often than normal, especially if accompanied with dry skin or hair loss, then a trip to the vet is in order.

If you decide on an American guinea pig, your life will change forever. These happy little souls can’t help but enrich you with their joie de vivre guinea pig style. Many happy memories are simply waiting to be made with these charismatic little fur balls

American Guinea Pigs make the most amazing pets, and are the perfect choice for anyone looking to get into the world of Guinea Pig keeping.

American Guinea Pigs on the Internet

If you needed any more reason to enter the world of guinea pig keeping, check out this super cute video. Lots of Guinea pigs getting up to no good, many of which are American Guinea Pigs